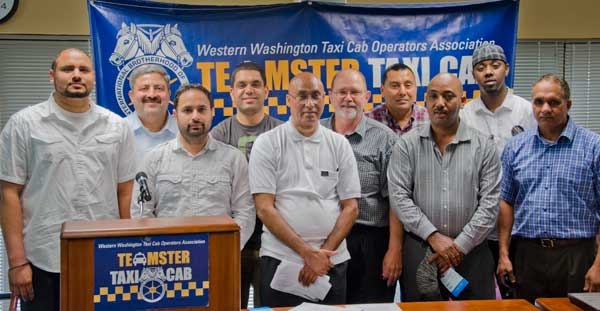 Teamster taxicab operators gathered on Saturday, July 27 for the Western Washington Taxicab Operators Association’s (WWTCOA) annual meeting. The purpose of the meeting was to discuss successes and challenges in the association’s first year and to set goals and plan for the future.

Tracey A. Thompson, Secretary-Treasurer of Teamsters Local 117 and the Union’s principal officer, moderated the event.
“Your effort to organize yourselves into an association is an inspiration to taxicab operators across the country,” she said.

Several WWTCOA members, including Jaquinder Singh, a driver with Yellow Airport, spoke about the association’s accomplishments in its first year:

“I would like to congratulate the WWTCOA for its successful 1-year completion with the Teamsters. The Teamsters have always offered great assistance in solving our problems. But the fight for workers’ rights is long and requires patience. I would like to request that we all tell drivers who are not Teamsters the benefits of the Union because the City will only listen to us if we are united,” he said.

At the meeting, members also submitted nominations for the WWTCOA Leadership Council for the 2013-2014 calendar year. There was only one nomination for every seat on the council. No seat had multiple nominations; therefore, no election was necessary.

Your new WWTCOA Leadership Council will meet again on August 22