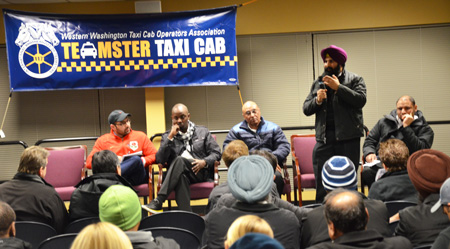 Teamsters 117 and the Western Washington Taxi Cab Operators Association (WWTCOA) hosted a political forum on December 10 at the Teamsters Building in Tukwila.

Over a hundred taxi drivers along with a dozen elected officials from the state, county, and city of Seattle attended the event.

The forum provided taxi operators with an opportunity to voice their concerns directly to elected officials about a variety of issues, including the continued lack of enforcement of for-hires and limousine drivers in the city of Seattle, the high cost of insurance, and the current mandate for drivers to participate in the State’s Labor & Industries program.

Currently, taxi cab operators are required to pay hundreds of dollars a month for their L&I insurance. One of the WWTCOA’s top priorities this legislative session in Olympia is to pass a bill that would allow taxi drivers the freedom to choose whether or not they want to participate in the program.

Teamsters Local 117 Lobbyist Teresita Torres has been meeting with legislators over the issue, and Representative Cyrus Habib (48th District) has agreed to sponsor a bill that would remove the L&I mandate for taxi drivers.

The bill (HB 2152) has already been drafted, and there is a public hearing to discuss the proposal in the Labor and Workforce Development Committee on Thursday, January 16 in the John L. O’Brien building at 8 a.m. This is a critical first step to see if the bill has traction among legislators.

Members of the WWTCOA Leadership Council along with the Teamsters are lined up to testify at the hearing. If you would like to attend, please talk to Dawn Gearhart at 206-441-4860 ext.1254.