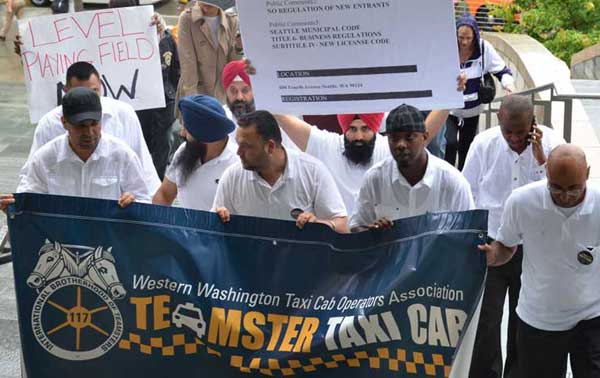 Meanwhile, a delegation of drivers from the Western Washington Taxicab Operators Association (WWTCOA) delivered a “Citation for Inaction” to the mayor’s office for the City’s failure to enforce existing laws that protect taxi drivers and their families.

“We demand that the City do its job and start enforcing existing laws,” said Salah Mohamed, a driver with Yellow Cab and a member of the WWTCOA leadership council. “The City is failing us, and we are not able to support our families as a result.”

For months, taxi drivers have urged the City to crack down on violators who are stealing their fares. They have met with city councilmembers and testified at public hearings. In June, dozens of drivers delivered a petition to the mayor’s office with over 500 signatures demanding that the City take action.

A QUESTION OF ENFORCEMENT

Under existing law, only metered taxicab operators are permitted to use designated taxi stands or to stop and pick up passengers who hail them on the street. Limousine and other flat-rate drivers are not allowed to pick up passengers unless the rides are pre-arranged and the rates are pre-negotiated between the driver and the passenger.

“Too many unlicensed drivers are breaking the law and the City is doing nothing,” Mohamed said.
The City has just one inspector on the street who is authorized to issue tickets to violators in an industry with 1,400 drivers. Lack of enforcement allows flat-rate vehicles to illegally undercut the fares of licensed cabs.

Taxi drivers have testified multiple times at the City’s Committee on Taxis, For-Hires, and Limousines Regulations meetings, calling for greater enforcement, but so far the City has not taken concrete steps to address the problem.

The Committee intends to release a report with its findings from its study of the industry on Tuesday, September 3 at City Hall at 5:30 p.m.

All WWTCOA members should plan to attend this important event!