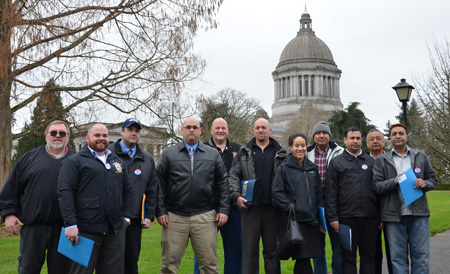 We have some great news out of Olympia!  Representative Cyrus Habib's proposed legislation (HB 2152) that would lift the Labor & Industries requirement for taxi cab operators has just passed the State House of Representatives on a vote of 93-1!

The Western Washington Taxi Cab Operators Association (WWTCOA) and the Teamsters have been working hard to pass the bill since the start of legislative session on January 13. WWTCOA members testified at a Labor and Workforce Development Committee hearing on January 16, and dozens of drivers spoke to their representatives about the importance of the bill at our Teamster Lobby Day on January 28.

The next big fight will be in the Senate, where we will need to speak out in legislative hearings and meet with our State Senators. Under the bill, drivers would still have the option to participate in the State's L & I insurance program, but they could opt out if they so desired.