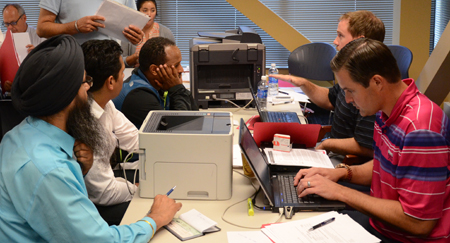 For the last two years, the Western Washington Taxi Cab Association (WWTCOA) has been working tirelessly to find reliable and affordable insurance for Teamster taxi drivers.

Taxi drivers have been forced to pay premium rates because of inflated prices and a monopoly of the market by a just a few providers.

Members of the WWTCOA leadership council, together with Local 117 staff, have spoken to a number of insurance brokers and have lobbied at the City, County and State level to change the laws that limited members' options.

Now, after a great deal of hard work and perseverance, WWTCOA members are able to get low-cost, high-quality commercial insurance that will save them between $1000-$2000 a year!

This is an amazing benefit for members of the association that helps them take care of their families.

"It used to be the cost of insurance was too high. Just a few people had a monopoly and they just wanted to give us one rate.  They were taking advantage of us," said Raymond Dhillon, a driver who is dispatched through Yellow Cab. "Now we have options. The taxi association and the Teamsters helped find someone who could give us a lower quote. This will save us approximately $2000 a year for one person. We're feeling good about it!"