Step up and Support Taxi Drivers 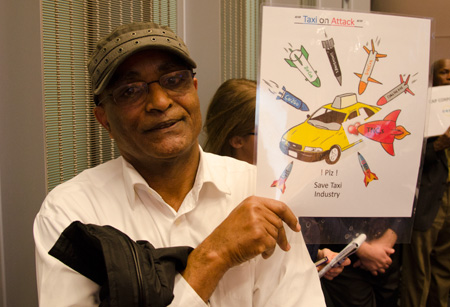 There is no doubt that taxis drivers are under attack, and it's time for all organized labor – not just the Teamsters – to step up and support them.

on February 27, the city council watered down a proposal to cap the number of TNCs, such as UberX and Lyft, which are currently operating unlawfully in the city and essentially driving taxis out of business.

These so-called "ride-share” companies, are corporate startups, funded by venture capitalists with deep pockets, who, as Councilmember Kshama Sawant rightly pointed out at last week's city council meeting, do not have "any interest other than their own profits."

The TNCs have used their vast resources to engage the public and sway the city council to a position that will allow more TNC vehicles on the road, 150 per company at any given time, than was originally envisioned.

This gives more control to corporations and less control to drivers who are struggling to earn a living.

Despite recent setbacks, Puget Sound taxi drivers, backed by the WWTCOA and the Teamsters, were able to achieve a limit on TNCs in Seattle, something taxis have been unable to accomplish in other markets.

This buys some time for taxis to implement changes that they must make if they are going to be able to survive.  Utilizing the latest technology, improving customer service, and building strategic alliances are a few of the steps that we will need to take to reinvent the industry and ensure that workers can continue to earn a living.